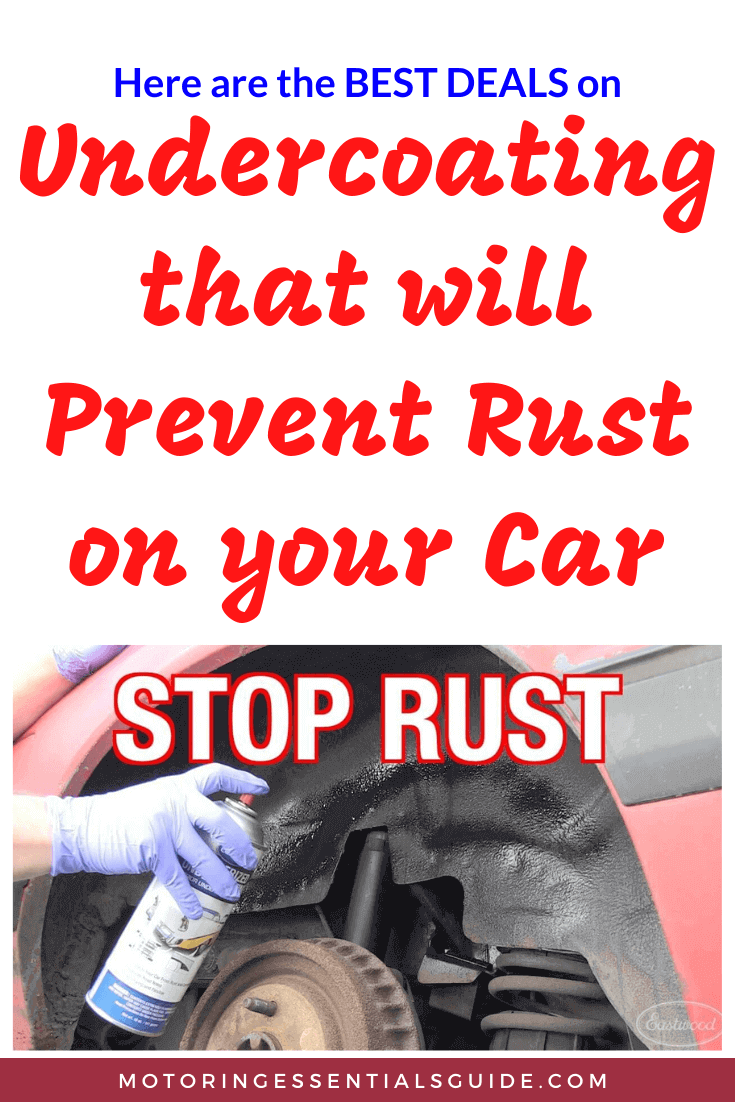 But can you really get the better of corrosion?

Well, to be honest, this is one hard battle you might have to wage as long you own the four wheels and the first step to avoiding corrosion is slowing down rust.

Sure, measures like washing your vehicle regularly and using rust treatment help, but applying the best undercoating to prevent rust is probably the best way to stop rust buildup in the first place.

Here’s our latest guide to help you discover the best rustproofing for cars.

Mother nature (rain, snow, high temperatures), prolonged exposure to damaging airborne pollutants, and even old age can all cause rust.

But these products will stop rust dead on its tracks: 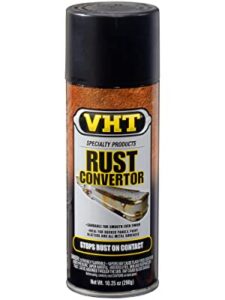 OK, perhaps not the finest analogy, but if there was a Nobel prize for rust-battling products, VHT store’s Rust Converter would have been a serious contender.

And VHT isn’t even the biggest name around!

Seriously, this stuff works great, and it has been garnering raving reviews from car owners since coming into the market.

You simply spray directly on severely corroded areas (or areas prone to corrosion) and relax – no more rust will form no matter the conditions.

Remember to sand down the blackish coat that it leaves on already-rusted spots for a smooth finish. The metal or frame will then be ready for painting.

One major reason that Boeshield T-9 (by The Boeing Company, no less!) is a cut above similar rust inhibiting products is that it penetrates deep into metal to:

That means its active ingredients don’t just sit on surfaces but battle corrosion from deeper, where it can have the worst effect.

It’s worth mentioning that typically, the super thin, waxy film it dries to, clings to metals for months.

Any spray painting, undercoating, or waxing works well when the car is clean. See our review of the best soap for washing car in 2022. 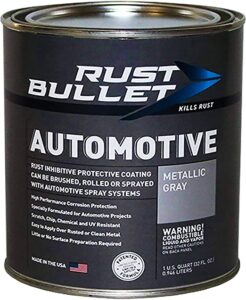 Unlike other standard undercoating products, Rust Bullet Automotive undercoating contains no heavy metals (Zinc, Chromates, etc.) so it results in a smoother finish.

Because it’s a little thinner than regular formulas, you can quickly and easily apply it with whatever you like- your HVLP paint gun (use a 2.0 tip), brush, or roller!

Besides, this best undercoating to prevent rust needs no primer- just apply it directly over the surface and voila!

And if you’re still having doubts if it actually works, it’s polyurethane based so it not only protects well but also bonds to rusty metals like a weld.

Bugs and tar spots on your car are unsightly and they need a polymer formula that will soften them for easy washing. See our review of the best tar remover for car paint that will wash away tar spots in a jiffy.

It’s no secret that taking your car for a professional undercoating job can be a costly affair.

The multi-purpose best 3M undercoating is also known for its second-to-none sound deadening properties so you’re in for a quieter ride.

If you’re a rust hater like me (show me a car owner who isn’t anyway!), you’ll grab this corrosion guard to keep your vehicle safe.

It’s an infallible guard- it adds an assured water-resistant barrier on surfaces to fend off moisture and all elements.

Even better still, the product prohibits rust even in areas where road salt is used extensively- no amount of salt or snow will break the seal.

Plus, there’s no need to use copious amounts here- a little goes quite some way while sticking around for reasonably long.

For years, it has been known that lanolin (wool wax) films give unparalleled protection against rusting when applied to metallic surfaces and this does exactly that.

It does not include any solvents, unlike a cross-section of its rivals, at least according to the list of ingredients that make it non-toxic.

But it includes a penetrating lubricant that helps it remain soft (so the coating will not crack like conventional hard-coatings).

You’ll absolutely love to have this.

And because of the special ingredients, the resultant coat is not easily washed off or scraped.

A quick word on application: Just shake it up and spray it on. That’s it!

WD40’s best rust prevention spray for cars will keep corrosion off your vehicle while keeping the metal lubricated.

And it treats corrosion pretty darn well, for that matter.

It is one of only a few corrosion inhibitors that protects for up to 1 year.

In fact, it blocks rust and corrosion for up to 2 years when used indoors.

The non-drying lubricant won’t run and stays where you’ve sprayed it.

The secret to this best undercoating to prevent rust? A superior formulation that’s quick-acting!

To help keep the rot out, it adheres strongly to metal, establishing an extra protective seal that often triumphs over moisture, road salt, chemicals, and much more.

Naturally, you can paint over it – and with no bleed-throughs- now that it’s a rubberized undercoat.

Just like the WD40 300035 Corrosion Inhibitor, it comes with a handy spray extension that allows you to spray into tight places easily.

Say hello to a peerless, multitasking corrosion treatment that is rust’s biggest enemy.

Trust us: If you’ve been losing sleep over rust on sensitive automotive parts, this champion rust treatment will be your savior.

And the fact that it repairs rusty patches before forging a formidable protective primer that prevents future corrosion makes it a winner.

It’s also laced with tons of other benefits that you will love- you can paint the coating without issues, leaves a silky smooth finish on previously rusted spots, applies easily, and much more.

The result is one of the most potent products that are super easy to apply, fast-drying, and that gives corrosion no chance.

And you really can’t beat the results- it covers so well and the applied coating is fortress-like.

Indeed, the Rust-Oleum 248656 undercoating spray is one of the hardest to be penetrated by chemicals, water, and salt.

In addition to having the best ingredients to counter rusting, this best rubberized undercoating deadens annoying road noises while resisting abrasion.

A Buyer’s Guide for the Best Undercoating to Prevent Rust

With the reviews out of the way, let’s look at the considerations you need to have in mind when shopping for the best undercoating for cars:

One of the first decisions you have to make is on the type of car undercoating that will be most suitable for your situation.

To point you in the right direction, here are the main types and what you should know about them:

Asphalt-based undercoating is arguably the strongest type of undercoating available in the market these days- it features the thickest coating and is packed with a ton of damage-resistant properties.

It also lasts pretty long and is perfect for vehicles that you use heavily or those exposed to tough conditions such as RVs.

In fact, this is often used for military vehicles.

Now, this undercoating is not paintable so it’s best for undercarriage only.

Also, keep in mind that it takes more time to cure.

Most importantly, it’s safe on sensitive parts such as wheel wells and quarter panels.

That said, it’s not as strong as asphalt-based undercoating though it dries faster and can easily be painted over/sanded.

Polyurethane-based sealants are quite effective – they bond with metal greatly- and super easy to apply.

Besides, this type of undercoating is easy to paint.

The only drawback is that there are more preparation procedures involved during application to achieve proper protection.

Paraffin-based or wax-based rust inhibitors are generally the most affordable and the quickest to apply.

The downside is that the protection is not that great and lasts just a couple of months- you need to re-apply sooner to restore protection.

2. How much undercoat do you need?

Because the products are packed in different volumes, we suggest that you have an idea of the ounces or gallons that will be adequate for the job before going shopping.

3. Be wary of the waning protective strength

These products lose their protective strength after being opened- some in a few months and others longer.

There’s no point in purchasing a product that is only available in 5-gallon sized containers if it has a short shelf life.

The other important thing is to be sure that the rust spray is safe on parts- many vehicles have plastic panels and some products have been known to damage them.

And for your own good, select a product that is non-toxic/non-hazardous.

While the various brands are not applied the same way, you don’t want to make life more difficult by buying an undercoat that’s a lot of work to accurately apply.

What is the difference between rust inhibitor and rust converter?

There’s a massive difference between the two…

To begin with, a rust inhibitor is a chemical substance that suppresses or at least, decreases the rate at which rust develops on a metallic surface it has come into contact with the inhibitor.

For the most part, these products hinder corrosion either by limiting the “active” surface area (on the metal) or interfering with the process that initiates oxidation (leading to the formation of rust).

As such, these are excellent when it comes to keeping rust from spreading further.

Like inhibitors, converters are available as sprays as well as roll-ons and paint-ons.

How to Prevent Rusting on Cars

Rust is easy to hold off if you’re prepared to counter it before it settles in.

Of course, winter (depending on where one lives) is the most trying season because the road salt exacerbates the problem.

Whatever the season, implementing the following suggestions on how to stop rust on a car from spreading will help (don’t forget to start by undercoating it):

(i) Check for and drain off stagnated water

Some spots in your car/truck are likely to hold water (for example the truck bed or trunk) and will eventually attract rust. Be sure to regularly inspect and drain them.

Bird droppings and spilled gasoline may wear the paint gradually leaving it exposed to corrosion.

Make it a habit to wash your car for maximum protection.

Those living in areas where snow falls heavily in winter should also wash the underside routinely during the cold months to prevent salt and other chemical deposits from settling there and weakening protection.

Tip: Adding baking soda to the mixture of water and soap you’ll be using to clean the underside helps further neutralize the acidity in the salt, further improving rust protection.

Another way to reduce the risk of rust developing on the vehicle body is waxing your car.

It protects the paint by preserving the oils included in the paint to thwart oxidation.

The little snow or salt you bring with you every time you get into the car can accumulate and cause the floor to begin to rust.

Luckily, you can easily keep the floor protected by buying and fitting all-weather mats to the floor contours.

The best undercoating to prevent rust is necessary for rust-prone areas of your car.

As mentioned, don’t trust the product you’ll choose alone – rust is a multi-faceted monster and you need to do more.

Employ the other rust-prevention strategies including watching for and draining any standing water in the car, washing it frequently, and waxing the vehicle (about two times in a year).

That way, rust will never run rings around your car or truck! 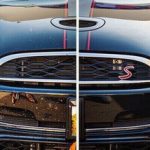 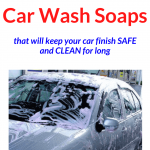 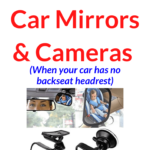 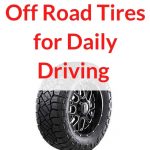